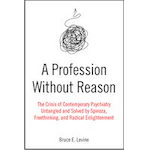 A Profession Without Reason

The Crisis of Contemporary Psychiatry―Untangled and Solved by Spinoza, Freethinking, and Radical Enlightenment

There is today a crisis in psychiatry. Even the former director of the National Institute of Mental Health has said: “Whatever we’ve been doing for five decades, it ain’t working.” The field of psychiatry requires a completely fresh look, and Bruce E. Levine finds that needed perspective in the seventeenth-century works of Baruch Spinoza. Readers unfamiliar with Spinoza will be intrigued by his life and the modern relevance of his radical philosophical, psychological, and political ideas. With the help of Spinoza, freethinking, and radical enlightenment, A Profession Without Reason untangles and solves the crisis of contemporary psychiatry. 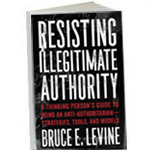 A Thinking Person’s Guide to Being an Anti-Authoritarian―Strategies, Tools, and Models

The capacity to comply with abusive authority is humanity’s “fatal flaw.” Fortunately, there are anti-authoritarians—people comfortable questioning the legitimacy of authority and resisting its illegitimate forms. However, as Resisting Illegitimate Authority reveals, these rebels are regularly scorned, shunned, financially punished, psychopathologized, criminalized, and even assassinated. Profiling a diverse group of US anti-authoritarians—from Thomas Paine to Ralph Nader, Malcolm X, Lenny Bruce, Jane Jacobs, and Noam Chomsky—in order to glean useful lessons from their lives, Resisting Illegitimate Authority provides political, spiritual, philosophical, and psychological tools to help anti-authoritarians survive and thrive. 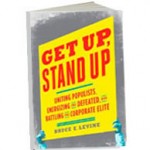 Get Up, Stand Up

Uniting Populists, Energizing the Defeated, and Battling the Corporate Elite

Polls show that the majority of Americans oppose recent US wars and Wall Street bailouts, yet most remain passive and appear resigned to powerlessness. Many Americans have lost confidence that genuine democracy is possible, and Get Up Stand Up explains how major US institutions have created fatalism. When such fatalism and defeatism sets in, truths about economic injustices and lost liberties are not enough to set people free—something else is required. For democratic movements to get off the ground, individuals must recover self-respect, and a people must regain collective confidence that they can succeed at eliminating top-down controls. Get Up, Stand Up describes how anti-elitists can unite and recover dignity, confidence, and the energy to wrest power away from the ruling corporate-government partnership (the “corporatocracy”). Get Up, Stand Up details those strategies and tactics that oppressed peoples have successfully employed to gain power. 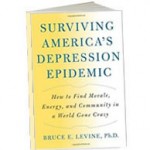 How to Find Morale, Energy, and Community in a World Gone Crazy

The rate of depression is the United States has increased more than tenfold in the last fifty years, and American mental health institutions have become part of the problem rather than the solution. The good news is that age-old wisdom and legitimate science—uncorrupted by the profit-margin pressures of pharmaceutical and insurance companies—have much to inform us about revitalizing depressed people and a depressing culture. Surviving America’s Depression Epidemic provides an alternate approach that encompasses the whole of our humanity, society, and culture, and which redefines depression in a way that makes enduring transformations more likely. 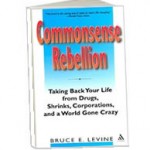 Taking Back Your Life from Drugs, Shrinks, Corporations, and a World Gone Crazy

In recent years the mental health industry has been attacked for the invalidity of its illnesses, the unreliability of its diagnoses, the ineffectiveness and dangers of its treatments, and its corruption by drug companies. Commonsense Rebellion integrates those critiques and goes further, arguing that “institutional mental health” has diverted us from examining an important rebellion. This rebellion—mainly passive and too often self-destructive—is against an increasingly impersonal and coercive “institutional society.” What has previously been pathologized is rehumanized and suggestions are made for regaining autonomy and community, and replacing self-destructive rebellion with commonsense rebellion.