Bruce E. Levine writes and speaks widely on how society, culture, politics and psychology intersect. His most recent book is A Profession Without Reason: The Crisis of Contemporary Psychiatry―Untangled and Solved by Spinoza, Freethinking, and Radical Enlightenment (2022).

His previous book was Resisting Illegitimate Authority: A Thinking Person’s Guide to Being an Anti-Authoritarian―Strategies, Tools, and Models (2018). Earlier books include: Get Up, Stand Up: Uniting Populists, Energizing the Defeated, and Battling the Corporate Elite (2011); Surviving America’s Depression Epidemic: How to Find Morale, Energy, and Community in a World Gone Crazy (2007); and Commonsense Rebellion: Taking Back Your Life from Drugs, Shrinks, Corporations, and a World Gone Crazy (2003).

A practicing clinical psychologist often at odds with the mainstream of his profession, he is a regular contributor to CounterPunch, Truthout, Salon, AlterNet, Mad in America,  Z Magazine, OpEdNews, and the Huffington Post. His articles and interviews have been published in the New York Times, Skeptic, Adbusters, The Ecologist, High Times, and numerous other magazines, and he has contributed chapters to The Military Industrial Complex at 50 (2011), Writing without Formula (2009), Perspectives on Diseases and Disorders: Depression (2009), and Alternatives Beyond Psychiatry (2007).

Dr. Levine is on the editorial advisory board of the journal Ethical Human Psychology and Psychiatry, and he is on the medical and scientific advisory board of the National Center for Youth Law. He is also an editorial advisor for the Icarus Project/Freedom Center Harm Reduction Guide to Coming off Psychiatric Drugs. A longtime activist in the mental health treatment reform movement, he is a member of the International Society for Ethical Psychology & Psychiatry and MindFreedom. Dr. Levine has presented talks and workshops to diverse organizations throughout North America.

Bruce E. Levine was born in 1956, grew up in Rockaway in New York City, graduated from Queens College of the City University of New York, and received his PhD in clinical psychology from the University of Cincinnati. He currently lives in Cincinnati. 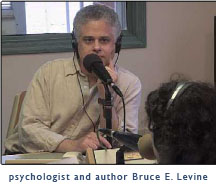